Anticipation is high for this year’s Facebook f8 conference. For those who don’t know what f8 is all about though it can be quite confusing as to why it is so talked about these days. The f8 conference is an event for “developers, entrepreneurs and innovators who are connecting people across platforms and defining tomorrow’s websites, applications and devices”. In short its a conference for everyone involved in the business of social media.

The conference, which is to be held tomorrow at the San Francisco Design Center at 635 8th Street in San Francisco, California will have three simultaneous tracks: the industry track, techniques track, open technologies track, and new tools track. Topics to be discussed under each track include:

As you can see in the next few days we can expect a glut of information appearing on blogs an on Facebook pages about stuff people learned during the f8 conference. 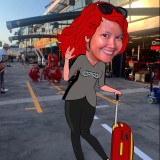