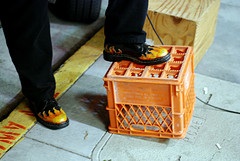 Social platforms are playing a huge role in the political world, both for the voters trying to gather information or express opinions, and also for candidates who wish to get their two cents out to their younger, web savvy constituents.

No longer can anyone use the excuse “I didn’t vote because I didn’t have enough information about the candidates.” The truth is the information we have is bubbling over.

Which candidates are the most tech savvy?

Well, Barack Obama and John Edwards both hopped on the Twitter bandwagon immediately (although Edwards hasn’t updated in 2 months–you gotta keep it up, John!). Both are using their tweets to share brief ideas, to give updates of where they are appearing, and to point their followers to videos of their appearances.

Do they have an edge over their fellow candidates who are not taking advantage of Twitter’s power?

Think about it–Obama presently has 6,663 followers and Edwards has 4,306. These are citizens who are basically saying “Let me get to know you over a span of time. Let me see what you have to say on a daily basis for several months and get an idea of what you stand for.”

Both Obama and Edwards have virtual followings who are willing to listen to them every day, as many times a day as they would like to communicate with them. That is a HUGE advantage over other candidates who feel so far away, like they’re so polished and unreachable that we don’t feel any great connection to them at all.

John McCain and Barack Obama both have created sites that allow for social networking, allowing users to create a blog, add friends, create groups and neighborhoods, sort of like a mixture of Facebook and MySpace.

So, who is running the most tech savvy campaign? Well, Obama seems to be the one who’s taking advantage of several social networking outlets and making and effort at frequent contact with his followers.

Does this make a difference in terms of votes won?

I think it will for me. I am very much the type of person who needs to feel a personal connection with the candidate in order to stand behind them. Issues do matter, but I also have to feel like I can relate to the candidate on some level. Candidates who are using Web 2.0 to their advantage have a much greater chance of winning my vote, since I can feel like we’re hanging around the virtual water cooler everyday via Twitter and Facebook and such.

What do you think–will the social networking efforts of this year’s candidates make an impact on who you vote for?

Photo Philo Northrup on the soapbox