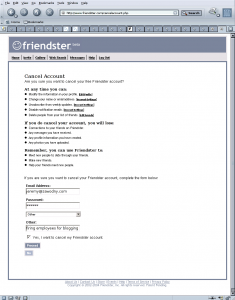 If you are among the people who are maintaining a Friendster account, you will notice that the past days have not been that accommodating. Friendster has been occasionally down and while many think of it as perhaps getting ready for something new, it can also mean that they are desperately seeking new scripts, programs and ways to win back the subscriber approval, much of which have shifted towards other social sites like Facebook and MySpace.

On another note, you may even view it as a bad omen, a sign of worst things to come such as perhaps shutdown of the site. Such things are bound to be in the air and hence one reason why a single instance of downtime can instantly change your fortunes of success.

Friendster has so far been falling in terms of popularity. It is evident that they are now ranked 3rd or 4th. They are starting to introduce the applications and new enhancements to which many foresee as a bit too late. So with that in mind, has Friendster taken its initial success for granted and is now playing catch-up to the leaders?

No one can blame Friendster for overlooking this scenario. In fact, if you go back some years, who would have thought that new sensation sites like Facebook would take the world by storm. Friendster was already a niche back then and apparently you can see that no business or community for that matter is safe from it all. Friendster just had to find out the hard way.