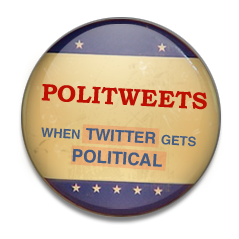 Kristin Gorski has a fascinating article at techPresidents about a new town in Twitterville called Politweets.

A new website called Politweets gleans the “tweets” which mention political candidates’ names and then displays them on its site in real time. What Politweets captures hints at public opinion and trends regarding the election. It has also become a news outlet, where private citizens, traditional media, and even the candidates’ themselves tweet about facts, opinion and web links to anyone who reads.

See, this is how social media is changing the landscape of the real world and is giving power to the people–Twitter is a very simple social platform that asks the innocent question “What Are You Doing?”, but the community that uses Twitter is inventing creative, intelligent ways to use it.

The tweets are short and to the point, free of political double talk, and are great at communicating to a large number of people instantaneously and inciting them to action.

How will Twitter and Politweets affect the Presidential elections? Tune in to Politweets during and after televised debates, primaries and elections and see the reactions of your fellow citizens in real time. Who knows, maybe your vote will be swayed by someone’s tweet. 🙂

Who would have guessed that Twitter would have the potential to influence the future of the USA and the global political world?