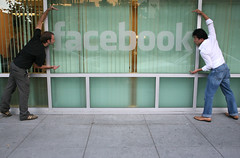 Sometimes I get annoyed at people’s 47 mile long facebook profiles. They take so long to load and sometimes they even bork my firefox. I try to avoid the place as much as possible. Well hopefully before spring we will have the chance to clean it up according to AllFacebook, who says that a Profile Clean Up Tool is on the way.

Facebook has posted about a new profile clean-up tool that they will be launching in the coming weeks. Following countless complaints about profile clutter and application overload, Facebook has developed an application similar to the Windows desktop auto-cleaner. The application will automatically keep Facebook’s applications as well as the top 12 applications that you have installed on your profile.

All other applications will be automatically deleted. Say goodbye to the “long-tail” of applications. I have a feeling that there will be significant backlash from a few application developers that are unhappy to see their user base drop drastically. Additionally, the number of applications that you can display by default in your profile will be limited to 12 applications. Rather than displaying all applications it will now display 12 and display a link that says “Show Extended Profile.”