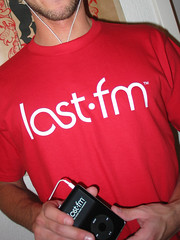 Last.fm, the social music platform that was acquired by CBS Interactive has made itself available for those accessing the web via Windows Mobile.

According to Mashable they could be coming to iPhones as early as next week as well:

Macworld Expo ‘08 launches next week in San Fransisco, California. The rumors of what we might expect to see have already circulated plenty as to what we can expect from Steve Jobs and Apple.

Here’s another: In a letter that was posted on Wikipedia (and then pulled), it seems that the iPhone will be getting quite a bit more attention from third-party supporters. You can add to the list Last.FM.

The popular audio streaming site is making a real push lately into the mobile space. Yesterday came the news that they have released a version of their application for the Windows Mobile platform, and now this rumor that it will be appearing on the Apple produced, iPhone.