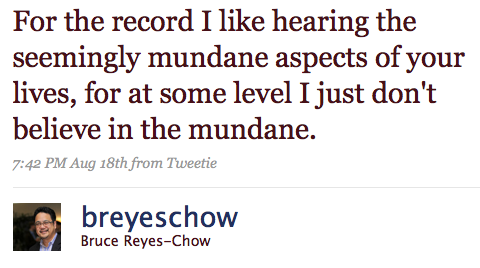 We know how mundane Twitterers’ updates can be but I never really realized just how boring most people’s update have are.

A recent study conducted by the Helsinki Institute for Information Technology revealed that the top five most frequent postings include the words “working,” “home,” “work,” “lunch,” and “sleeping”. According to the study the reason for the mundane postings probably hinge on the fact that “while microblogs do not obligate a reply from followers, posting on a daily basis is important for sustaining the interest of others” because of the pressure to post frequently they concluded that postings end up mundane, especially since they say that microblogging “is a hobby that seems to require a significant investment of time which many cannot afford.”

As a consequence of this mundane internet chatter via microblogging sites such as Twitter and Jaiku, only a few of the microbloggers actually end up dominating the microblogging world. In fact the same study showed that in Jaiku “a small supercore of the Jaiku population received over 50% of all comments in the system, while a large part of newcomers found it hard to build and keep an audience and dropped out quite soon after registering.”

What this means is that “business microbloggers” need to realize that they need to really make an effort not only to post frequently in Twitter and Jaiku but to also make sure that they don’t end up with mundane/repetitive posts. It should be a goal of the business to make it to the “supercore” of microbloggers because that is where the power lies.